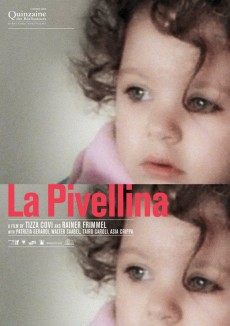 I was sure I was going to write about this film, it seems so small and hard to recommend to anyone who isn’t a diehard cinephile. But then I read a review and I’m going to pull some ideas from there because it was so inspiring about the core of films like these. La Pivellina is exactly the kind of film that should be written about precisely because of what it isn’t.

Co-directors Rainer Frimmel and Tizza Covi present a pseudo-documentary where the story is realistic over cinematic and the production is minimalist versus gratuitous. A minimalist production ethic isn’t about not having things but not needing them. I believe in this style of filmmaking. It allows a story to unfold without distraction.

Here the story of an abandoned young girl found in a park by a circus woman feels raw but not rough. It cannot be confused with the amateur eye of a mumblecore film which seem as though they are fumbling around seeking depth to pacify pseudo intelligence. There isn’t a prepackaged depth presented in this story, the ending doesn’t tell you about yourself, or what to think of the world. You are given a glimpse and then its up to you to dissect. It may be uncomfortable to some to have to put the work, especially as the ending leaves us with some imagining. But then we become the storytellers, which is kind of wonderful.

I’ve been in discussions with a fellow filmmaker about a concept presented in the silliest of places — still, all this time later, I reference it as a genius point of distinction. I’m talking about indie film verses independent film and I’m talking about Strong Bad.

Strong Bad was a character from an a Flash animated web comic, but more importantly the ridiculous comic made a very valid point about the difference between independent films which are artistic, no-budget, and personal. While indie films are greatly nepotistic, feature a-list movie stars working for scale, and use their large budget to make it feel artistically low-budget.

For so long the media arena has been falsely presented as having just two corners — massive budget blockbusters on one side and anything under 5 million on the other. But in fact there is a varied scale which has more to do with content than anything monetary. Indie films follow the same story-beats and blockbusters while independent films do not limit themselves to a specific type of storytelling. They are therefore often viewed as lacking but what they lack is done so purposefully — they lack the sense of narrative that does not fit with the way the world is. They represent reality as it is directly understood either artistically, culturally, or precisely by the person or persons behind the lens.

As I’ve been writing the 2013 advent series, maybe you’ve noticed a pattern. That good stories are not going to always hit the same notes, they may not have refrains, there may not be verse, chorus, bridge, repeat– that’s what makes film good. I hope even more filmmakers will have the opportunity to create with their sense of style and that audiences will be encouraged to share these unique films — no matter the size. 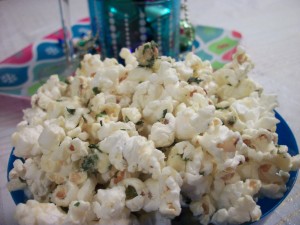 There are some ingredients that just go together and when you mix that with the perfect movie — ahh è bello!

This popcorn reminds me of my favorite pasta dish, clam sauce linguini. You could even go so far as to make it clam sauce popcorn, but I thought that might be pushing it for most people so I reduced the dish down to the basics. Olive oil, parsley, and Parmesan.

Make the popcorn according to your favorite method. Remove the unpopped kernels and put the popcorn in a mixing bowl.

In a sauce pan add the oil and spices over medium heat. When the oil warms and the smell of the herbs blooms, add the Parmesan. Cook for 1 minute, swirling the oil and cheese together.

Pour over the popcorn, mix to coat, and serve immediately with good company and a glass of wine.