The Film: The Artist – France 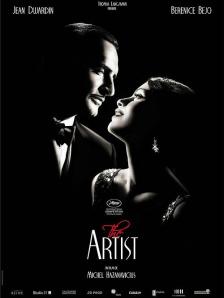 This was the best theater experience I had all year. Going to see Tintin and The Hobbit was exciting, both being big spectacles filled with adventure and directed by film giants — but The Artist spoke to the cinefile in me, helped me remember not only why I love film but that small stories can be big successes.

The first silent film I watched in a theater was Nosferatu. A pianist accompanied, which made it rich and memorable experience. I can only hope, as the years go by and the cinema experience becomes increasingly futuristic, in a local theater somewhere that throwback experience is still happening.

So far, it doesn’t seem as though The Artist is going to incite a silent film rage. Though we’d be better off if it were to happen than the reality of what has occurred — a million films attempting to imitate The Hangover and Bridesmaids.

The rewind to a more simple time in the hands of writer and director Michel Hazanavicius doesn’t feel simple at all.  It’s every bit as modern as any story about making it, trying to live with success, the downfall, and the discovery of what really matters. The production doesn’t alienate a modern audience, it asks for you to come along and have a little fun. It never works too hard or tries to be a gritty look at days gone by — it’s a comedy, a toast to making movies, and there are no apologies for it. And there need not be.

The number one reason this film is at the top of my list this year isn’t just the great cinema experience, but despite that the film is about Hollywood and stars numerous American actors — it is actually a foreign film.

Like Run Lola Run, this is a film which would never have made it on paper alone it had to be made. Hazanavicius talks about this experience, having to convince not just others — but himself. But it was made, and the film was a success despite all of the reasons one could give why it wouldn’t work. It did work.

I love The Artist for what it is but also for what it represents. A foreign film with a small, well told story, brilliantly directed, that beat out a lot of films to win a lot of awards and deserved them all.

During the holidays it’s nice to have a light salad but even with the multitude of varieties now available everywhere, lettuce can get boring.

This is the best salad in the summer but, as it turns out, it’s not too shabby in the winter when you long for that little bit of sun to break through the gray clouds. It couldn’t be an easier or more flexible recipe and the crisp taste is just what you need to cut through a heavy meal.

It tastes brilliant with Savory Beef or any seafood dish. It would be nice with Almond Chicken or Vietnamese summer rolls and when summer does come around, eat it alone in a big dish with a side of cold bubble tea. Perfection!