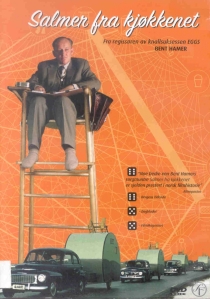 With Scandinavian films I have learned to just watch. Stay with it. Beginning to end.

My first experience was watching Italiensk for begyndere. My perception before, during, and after was nearly as compelling as the film itself. This unique experience has only happened with some American and French films, including Roman de gare, The Hong-Kong thriller Infernal Affairs, and a few Scandinavian films — including Kitchen Stories.

To convey the story isn’t enough. An attempt to define it may ruin your viewing pleasure. I knew very little about Kitchen Stories when I saw it and I think this was to my benefit. But I will say despite first appearances, it is a comedy. Taking place in the chill of post-war Sweden, writer/director Bent Hamer’s slowly unfolding story requires the audience to be in a subtle mood. But if you’re up for it, the reward is a unforgettable tale of cultures and men.

As I celebrate a global Christmas, Kitchen Stories reminds me what brings us together. It reminds me of the kitchens I’ve cooked in, the memories I’ve made, and that with a cold film you need some warm food.

My grandmother was a great cook, but she wasn’t known for her foreign food. It wasn’t something she did. In fact, aside from an awesome vegan salad made for a guest, this is the only food I even remember her making that wasn’t Ukrainian or standard American fare.

When she entered her 90’s, Grandma was bored with cooking the same old things, tired of sandwiches. So she bought the curry powder and tried something new. It was exciting. For the first time she shared a dish with me I hadn’t had before. As I made it today, I thought of her. 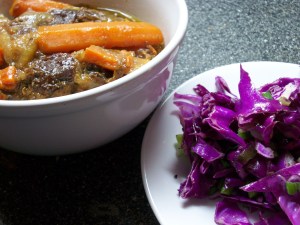 The recipe came from a Better Homes and Garden’s and although the authenticity is dubious — the taste more than makes up for it. The chicken thighs are tender, the vegetables and prunes melt, and the warm broth of cinnamon and curry is perfect over couscous.

In a 4- to 5-quart slow cooker combine onion and carrots. Add plums and broth. Top with chicken. In a small bowl combine curry powder, salt, and cinnamon. Sprinkle over chicken.

Cover and cook on low-heat setting for 8 to 10 hours or on high-heat setting for 4 to 5 hours. Remove chicken, fruit, and vegetables from cooker with a slotted spoon. Spoon some of the cooking juices on each serving. Makes 4 servings.

In my experience, the meat and vegetables are incredibly tender before the full cooking time. I serve it with couscous and top it with toasted almonds and a little yoghurt. A raw cabbage, green onion, nigella and fennel seed salad makes a tasty side.