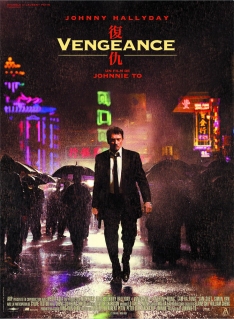 The Film: Fuk sau [Vengeance]
This film bends the rules ever so slightly. It’s actually a co-production between Hong-Kong and France but I liked the culture-mash so much it deserved to be a part of this series.

I had seen Johnny Hallyday in Man on the Train  and thoroughly enjoyed him in that role. I had no idea what kind of actor he was so I was curious to see his performance in another film. I was also watching a lot of independent Asian gang-related action films at the time, which this happened to be. I started it because of the culture mash, I finished it because of Hallyday. His character is one of the most sympathetic, both as written and acted, I’ve seen in a revenge film and though I still don’t like the genre as a whole, this film instantly became an exception.

Professional chefs are constantly trying to make each individual ingredient as small and pure as possible to blend all the flavors in a dish. But sometimes it’s more enjoyable to get a rogue chunk of cheese or hit a tangy zip of garlic than it is to have everything the same taste and texture. While Fuk sau is an action film it’s also a character study. But it never tries to blend the two to the point where it becomes a third genre. It is consistently both at the same time. What ties both genres together is a psychological element that effects the entire story and makes both that much better.

The directing is precise, it never feels rushed, and the artistry really fits the story’s neo-noir feeling. The best example of this are the scenes on the streets of Macau and the greatest of these is the best part of the film — its climax. I was completely on our anti-hero’s side, I wanted him to make it. I cheered for him to win. The film is violent, truly, and is by no means a perfect. But its unique qualities make it an unforgettable experience. 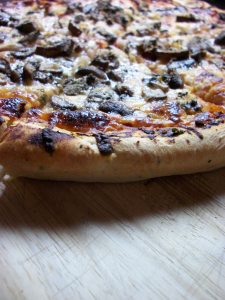 Pizza dough is the cheapest thing to make and the most expensive thing to buy. Ever since the first batch I made in the bread machine I knew it would be hard to eat anything else. There area few exceptions but with grocery prices going the way they are it seems I will be forced to do something wonderful for myself. Only eat pizza I make from scratch. It’s a sacrifice, but I think I can do it.

The first thing to know is it’s very hard to ruin the dough recipe. I’ve done every possible thing to it and though adding any different ingredients dose change the texture — it’s always a tasty result. Of course I always add herbs, but this time I was relatively faithful to the recipe. I did take out one tablespoon of bread flour and add one tablespoon of corn meal and in order to get the dough the right consistency I did add extra olive oil as it was being thrown around in the machine.

The best part is the toppings and this time I did it two different ways. The first was a shallot and baby portobello mushroom. I used a tinned tomato paste, mozzarella and Parmesan with Romano, and finished it with crushed dried basil and oregano from the garden. I put a little olive oil on the crust and popped it in the oven. It. Was. Perfect.

Just the right amount of tasty crust without all the grease and salt of delivery or the price of a frozen pizza. Up next was the brilliant combo of ham and pineapple. I used a very tender ham with a dense smokey flavor and crushed pineapple, only mozzarella cheese, and topped it with extra Italian herbs and garlic powder. What a perfect antidote to the blistering winds and soggy rain. 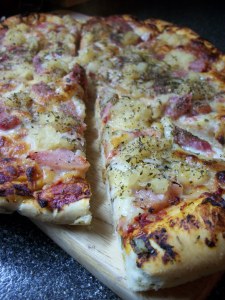 My bread machine is a Welbilt ABM2H60. I use the dough setting which is 90 minutes. This is the large batch which is supposed to make four pizzas but I usually make two on a 12″ pizza pan. I like a thick crust. The ingredients are to be added in the order listed. This is my slightly modified recipe:
1 1/3 cups Water
1/4 cup olive oil
2 teaspoons Salt
2 teaspoons quick yeast
4 cups minus one tablespoon bread flour
1 tablespoon cornmeal
Garlic Powder, to taste
Italian Herbs (Rosemary, Oregano, Basil), to taste
When the dough is done, remove and portion into even pieces. Lightly oil the pizza pan. I use spray olive oil. Roll or hand shape the dough onto a pizza pan. Top, oil the crust, and bake at 400° until the cheese is melted and the crust is golden brown.