The Film: Ne le dis à personne [Tell No One]
Complex and twisty, dark and thrilling. I fell for this film immediately. There’s a lot to praise about this film but two things are particularly wonderful about it. The first is writer-director Guillaume Canet and the second is every scene between François Cluzet and Gilles Lellouche.

Canet adapted and directed with confidence and it shows. The tight lock on action and tonal shifts which moved with the story made it easy to forget there was someone behind the camera calling the shots. It’s particularly rare for modern filmmakers to be strong enough to do things in a classic style, to realize it’s not always important to reinvent the wheel.  That’s not to say there isn’t style but Canet knows when to do style and when to get out of the story’s way.

Though the film is unrated, I’m sure it would be R. There is nudity and violence which is intense but I don’t think either element went too far outside of the scope of the story. The highlight of the film for me was the relationship between the protagonist played by François Cluzet and the man he is forced to rely on played by Gilles Lellouche. Their chemistry brings a whole new level to the story but never feels forced.

There are many scenes which make the film worthy of recommendation, and so many details I’m glazing over here. But the two scenes which that take place at the carved tree which flank the story prove that a great thriller has more than just thrills, it has character. 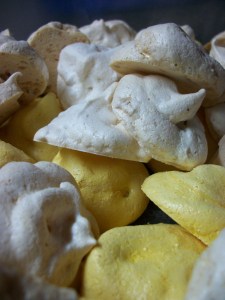 Meringue is one of those items I always heard was easy but assumed was a lie. I was wrong and I’m proud to say I have now added  meringue to the “M” section of I items I can bake.

I cannot fully express how pleased I am with the way they turned out. Not only are they unique in texture but the flavor combinations are endless, which is always an added bonus to any recipe. They do take a little bit of time, as anything involving stiff peak egg whites does, but if I can do to it — I tell you, anyone can.

I made one batch and divided it into three separate flavors as I had three extracts. So I made lemon with white chocolate tinted yellow, almond with blanched and toasted almond bits, and vanilla with chocolate chip.I also wanted to note the recipe says to put all the meringue on two cookie sheets and bake at the same time. I’m not sure what happened but I ended up with way more than two cookie sheets worth. Next time I would half the recipe and make it in two batches.

I mixed the extract and nuts or chocolate in the Ziplock bag, mashed it around and cut the corner of the bag. I piped the sticky dough onto cookie sheets sprayed with PAM for baking. I don’t know if they’re the best texture you could possibly achieve in the world of meringue, but I couldn’t care less. They came off the baking sheet with ease and the taste is — amazing. That crisp crunch, unique, creamy and sweet.

Don’t forget to read all the tips on how to get the best meringue before starting the recipe.

Bake both sheets of meringues at the same time 45 minutes. Turn oven off. Let meringues stand in oven 1 hour or until completely cooled.